Ruth began studying the piano at 3 years old, and in her early childhood went on to compete and thus perform in places such as Carnegie Hall & Steinway Hall, in New York City, NY, as well as various other venues in the tri-state area. She also competed and performed 3 times in the Festival Musica in Laguna in Chioggia, Italy, where she performed a movement of a piano concerto with the Orchestra Sinfonica del Festival di Chioggia.

From late middle school through high school Ruth stopped competing and learned the guitar, bass guitar, and drums. She became very involved in the music ministry at her church.

In 2014, Ruth graduated from Lancaster Bible College in Lancaster, PA with her Bachelor of Music in Music Pedagogy and Bachelor of Arts in Biblical Studies. There she collaborated with and accompanied many vocalists and instrumentalists. She received Honorable Mention for her piano piece titled, “Ballade” in the national Hal Leonard/Carol Klose Composition Competition. 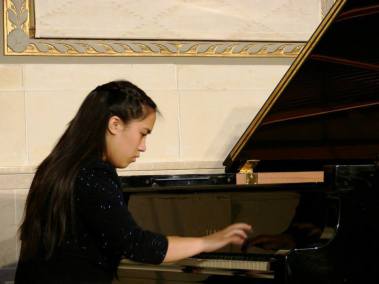