Tamara deMent is a sought-after musician noted for her versatility, rich tone and lyrical improvisation.  She’s proficient in a variety of styles ranging from classical, jazz and rock. She has been working as a freelance player since 2001 and currently plays with the Dan Burke Acoustic Band, the Tim Lekan Quintet and the Gina Roche Trio.

Tamara has been a featured jazz performer for events funded by the Mid-Atlantic Center for the Arts and Humanities, as well as Cape May Jazz Vespers, Cape May Music Festival and Jersey Shore Jazz Vespers. She’s performed venues such as The Kimmel Center, Brooklyn Botanic Garden, Waldorf Astoria In New York, the Union League in Philadelphia, Chris’ Jazz Café, the World Café Live, and the Academy of Music. In 2015 she was featured on Ferit Odman’s album “Damaronia with Strings,” which was produced by Equinox Music and Entertainment.

Tamara started playing the violin at a young age under the instruction of Philadelphia's iconic teacher, Julian Meyer of the Temple University Music Preparatory Division. She continued her training with Larry Grika, a long-time member of the Philadelphia Orchestra. In 2003, she received a Bachelor of Arts from Stockton University. Tamara shares her talent every year at regional non-profit fundraising events, including events for MANNA at the Shore, the Hansen Foundation's annual Street Life Concert. 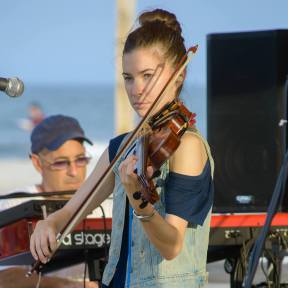