Tom Long Jr., Director of the Lumberton School of Music earned the prestigious 4 year “Presidential Scholarship” for academics and talent to the University of the Arts in Philadelphia where he graduated on the Deans List with a Bachelor of Arts Degree in Jazz Performance in 2002.

As a young player, Tom was named to the All-South Jersey band 5 consecutive years and in high school was an All-State player on two instruments in both Jazz and Concert bands winning numerous outstanding soloists awards.  He was also named to “The Grammy Band” honoring the finest young musicians in the country.  At age 16, Tom performed at the Cape May Jazz Festival and arranged and recorded his first album.  During this time Tom began to teach instrumental music and theory to players of all ages both privately and in studios throughout the Burlington County Area.

Tom regularly performs at The Blue Note in New York City, World Café, Warmdaddy’s and countless other venues often to sold out audiences. He has made four full-length albums. Some of his music has been used for television and played in regular rotation on WXPN 88.5 FM. Tom is one of the most versatile musicians around having played a dozen instruments on numerous recordings for several bands. In 2010 Tom opened the Lumberton School of Music in his hometown of Lumberton, NJ to be available to students throughout the South Jersey area. 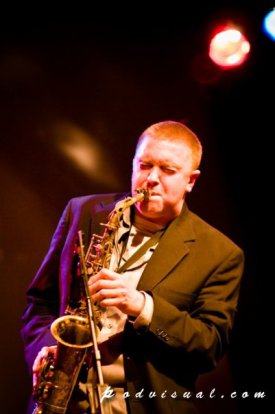